Benjamin Franklin is remembered as a patriot whose contribution to establishing the United States federal government – in addition to his advancement of the printing industry – led to him being honoured on the first US postage stamp.

Known as one of the Founding Fathers of America, he was among delegates at the Constitutional Convention of 1787 who signed the United States Constitution, freeing the nation from British rule with the Declaration of Independence.

A multi-talented man, he was not only a politician and scientist but also a newspaper editor by the age of 17 and the owner of a printing shop when he was 22.

Benjamin was the youngest of 10 sons born to soap and candle maker Josiah Franklin of Boston. Born on 17th January 1706, Benjamin left school aged 10 to work for his father, later working at his older brother James’ printing business at the age of 12.

This set him up for a career in printing and at the age of just 17, he began publishing the New England Courant newspaper, reporting on local stories of interest. After moving to Philadelphia in 1728, the young Benjamin opened his own printing shop, where his most famous publications were the Pennsylvania Gazette and Poor Richard’s Almanac.

He also set up a library to benefit members of a traders’ discussion group, known as the Junto, as books were very expensive in those days and only affluent members of society could afford them. He established the Library Company of Philadelphia in 1731, which is now a scholarly and research library.

In 1758, he printed Father Abraham’s Sermon – otherwise known as The Way to Wealth – and from 1767, he printed the Pennsylvania Chronicle. He also worked as a typesetter in a Smithfield printer’s shop in London for 18 months. Despite also being a politician, inventor and the first US Postmaster General, he always considered himself a printer.

Benjamin’s career with the postal service began in 1737, when he was appointed postmaster of Philadelphia. It was common practice to appoint newspaper publishers as postmasters, as it helped them to gather and distribute news.

He was then appointed comptroller – the American term for a chief financial officer of a public body – responsible for overseeing the post offices’ finances. He was named joint postmaster general on 10th August 1753.

Making many useful changes, such as introducing new accounting methods and organising riders to transport mail day and night, he was instrumental in the establishment of the penny post and the delivery of all newspapers for a small charge. His leadership led to the first North American profit for the Crown in 1760.

In 1763, he personally travelled 1,600 miles to survey postal roads and Post Offices from New England to Virginia to improve services. On 26th July 1775, Benjamin was appointed Postmaster General, with a salary of $1,000 per annum and responsibility for all post offices from Massachusetts to Georgia.

Franklin also found the time for many other important achievements, such as inventing the Franklin stove and the lightning rod and founding an academy which was to become the University of Pennsylvania. In 1743, he founded the American Philosophical Society and he also studied demography and population growth, publishing a report in 1755 – Observations on the Increase of Mankind.

In 1775, he became the Pennsylvania Assembly’s delegate to the Second Continental Congress and in 1776, he was instrumental in the Declaration of Independence.

After Benjamin’s death on 17th April 1790, his memory lived on when the United States issued its first postage stamp under the Congressional Act of 3rd March 1847. Initially, it was planned to use a portrait of the late President Andrew Jackson on the five-cent stamps. 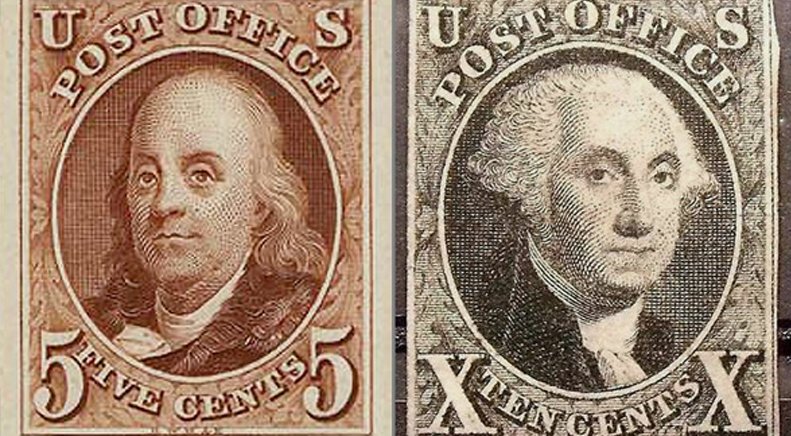 Based on an image by James B Longacre, Benjamin’s image was substituted because of his role in securing US independence. The stamp was launched on 1st July 1847 and paid for a letter weighing half-an-ounce or less, that was sent less than 300 miles.

The US post office has since issued more than 130 stamps depicting Benjamin Franklin, who has also graced postal stationery and revenue stamps. In 2006, the 300th anniversary of his birth was honoured with a pack of four stamps depicting his roles as a postmaster, printer, scientist and politician.